Good to see people already planning for next year, I can't wait to see what springs from the hive mind as the focus event for that. Oldhammer Ahoy pipped the Deathrace to the highlight title for this year, at least for me, and the photos over on Shadowking's blog showcasing the quality and quantity nicely illustrate why, although they looked even better "in the flesh".

Captain Crooks travelling from the other side of the world to put on a game rather puts everyone else to shame though! 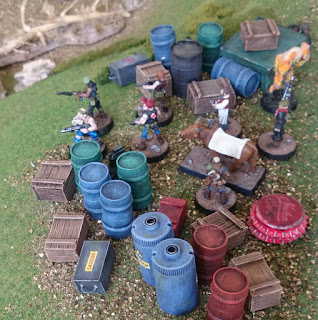 The Nuka-Cola bottle caps are re-roll tokens, which we each had 3 of, and hint at the shear level of effort that LegioCustodes had put into preparing for the game. 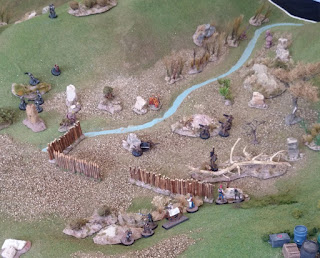 The game was a great showcase of how GM'd scenarios outshine straight forward two-player games. There were six of us playing, with only the supermutants and the Children of the Cathedral having the luxury of knowing who was "against" them (everybody) or who they were "against" (everybody).

I spent the game feeling decidedly out-gunned, but my objectives didn't actually set me against anyone and I was extremely fortunate that all the potential obstacles in my path were either dealt with by other players or decided they had other groups they'd rather fight elsewhere.

I managed to achieve my objectives without firing a shot, and with only one or two unsuccessful shots aimed at me. I had the occasional feeling that it'd be fun to take a more active role than was strictly necessary but was conscious that to do so would probably go badly for me, never mind the fact that ammo you use is ammo you can't sell later!

Fantasy remains where my heart is, but on this showing I would happily paint more stuff with guns.

Email ThisBlogThis!Share to TwitterShare to FacebookShare to Pinterest
Labels: Bring Out Your Lead, Fallout